First of all, eating out with a small child can be a challenge. You have to be prepared that mealtimes can be pretty tiresome. Small children are often impatient and you might have to run around after the child who’s looking at things in the restaurant, babbling with other guests and so on. The good thing is that small children are accepted and welcomed in most places in the region, and restaurant staff often go out of their way to accomodate a little one.

We would often chose to go out for a bigger meal at lunch because Maya often would be so tired in the evening that dinnertime was best left as a quicker meal. But often we would also let her nap a little extra during the afternoon so that we could go out later and enjoy ourselves. Here are some of the restaurants that we enjoyed on that trip:

In Bangkok we stayed at the Amari Watergate hotel, and decided to dine in (room service) when we were hungry and Maya was too tired. The food was legit and service was quick, although prices obviously reflected the hotel standard, which was pretty high. We also ate a few times in the food court in the shopping mall across the street. That was a highlight experience! It’s extremely cheap and the quality and freshness of the food is top notch. We had some typical Thai dishes, like Tom yum and Mango sticky rice. The mall is also worth checking out (not high end, but a fun place to buy cheap clothing!).

For one of our lunches, following a morning at the Wat Pho and Grand Palace, we ate at The Deck, a charming restaurant that has both Wi-Fi, AC and good food. We ate a lovely dish with chicken and cashews, amongst other things.

Not all of the restaurants we ate at are even possible to remember, due to the fact that we were taken to a couple of them by our tuk-tuk driver on our guided tours of Angkor Wat. It is, however, worth noting that most road side restaurants of the area have a “foreigner friendly” menu, which means that it is generally safe to eat there, alas also pretty expensive compared to the regions standards. For this reason they often have a “locals” section where the food is substantially cheaper, but it’s also not advisable to eat there if you’re not prepared to undergo a radical change in you gut micro biome.

In the city of Seam Reap we had a few meals at the hotel we stayed at, which were memorable. Both Thai style food and more local Khmer food. We also had a few meals at the Khmer Kitchen, which had a very authentic feel to it. The dumplings were especially very good. But in my opinion there is no shortage of good food in Siem Reap. The place is so foreigner friendly that most of what you find is both safe and tasty. It’s also pretty child friendly on that there are many easily likeable dishes based on noodles or rice, but also many western favourites as pizza and barbecue. On our last night went to a fancy restaurant, which there are plenty of in Siem Reap, but that I maybe wouldn’t recommend ding with a small child (even though we had a nice time, and the staff were pretty helpful and didn’t care much that our daughter smeared the food onto the table cloth and threw some on the floor).

Hoi An is another place with absolutely no shortage of good eats. As we stayed there for almost two weeks we obviously tried many different places, so I’m not even going to try and mention them all.

One of our favourites in Hoi An were the Banh Mi and Vietnamese coffee places. One of them was Madam Khanh – the Banh Mi Queen. The place is simple and only offers a few varieties on the Banh Mi, but the flavours are truly amazing, and the atmosphere is very cozy. I tried many coffee varieties, and the best is the simple black coffee on ice, but another one worth trying is coconut iced coffee. I had a few of them, and they varied in quality, but they were all very tasty!

A few other places we liked were Morning Glory and Lucky Beach restaurant, which is on the beach a few kilometers from town. Many of the other restaurants I can’t find online, like one located on a pedestrian street very close to the Japanese covered bridge, with low wooden chairs painted in different pastel colours. The seating worked very well with Maya, as she could stand by the table and grab food if she wanted to.

We also ate several times at our hotel/homestay the Palm View Villa, which honestly is one of my favourite places to date.

Having stayed two weeks in Koh Samui surprisingly there are very few restaurants that come to mind.

The first week we stayed at Kings Garden Resort and would eat around that area. The shopping mall houses quite a few nicer restaurants, like the Zen Japanese restaurant, but there are so many restaurants around that you’ll easily find good and cheap options.

The second week, when we stayed at the Amari Koh Samui, we often had lunch at Sala Thai. It was close to our hotel and the food and atmosphere were very good. We also ate at the hotel from time to time, which was good apart from an isolated incidence of stomach upset.

Both weeks we trained Muay Thai at the Star Gym, and would often have dinner at the Chaweng Night Marked after. We tried different things there, but our favourites were the grilled fish, spiral potatoes, grilled spare ribs, grilled prawns and the fruit juices. No stomach upsets despite the obvious lack of big kitchens. This is probably the most memorable place that we ate the whole trip, probably mainly due to the fact that is was so simple and easy to bring Maya. 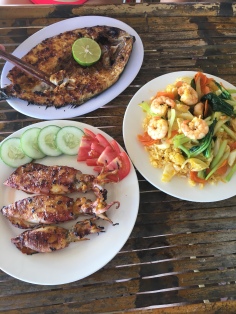 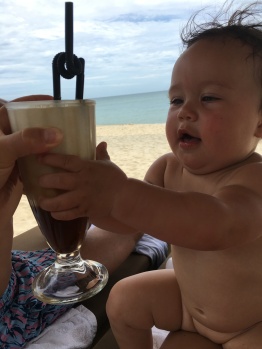 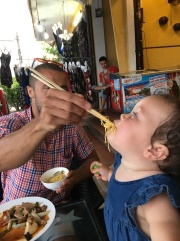 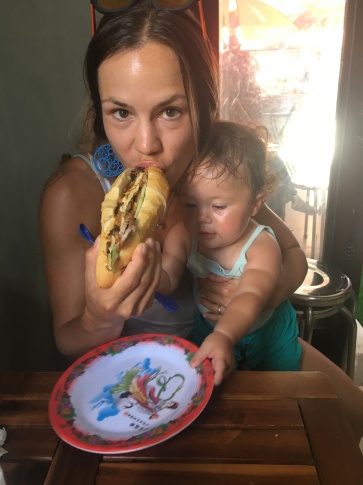 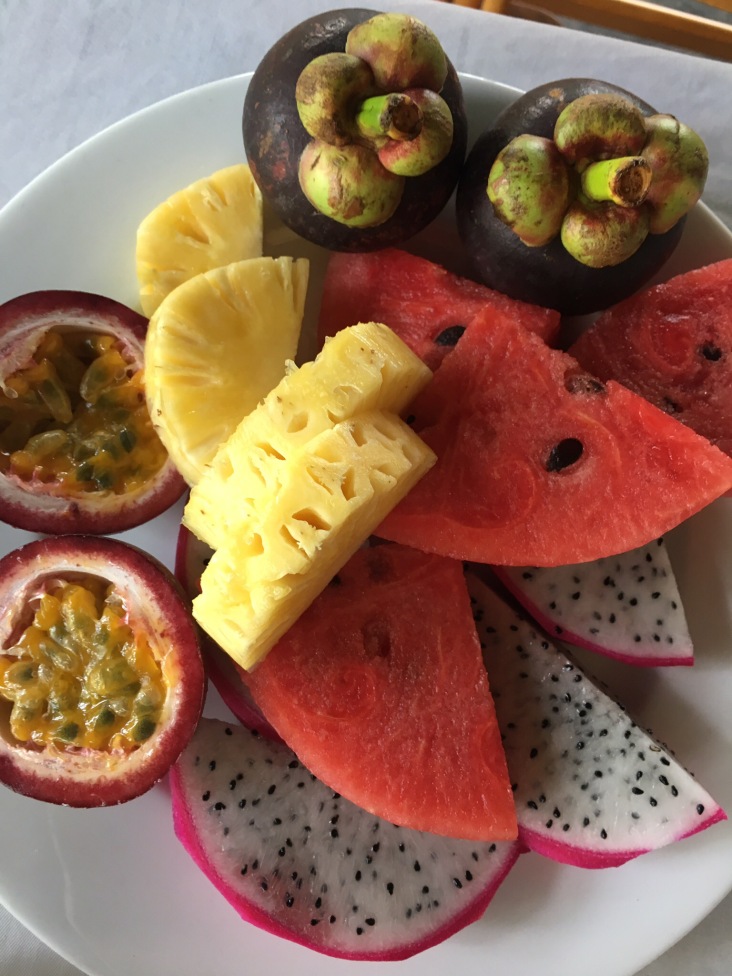